Return to Kabylia one month after the summer fires - Jeune Afrique 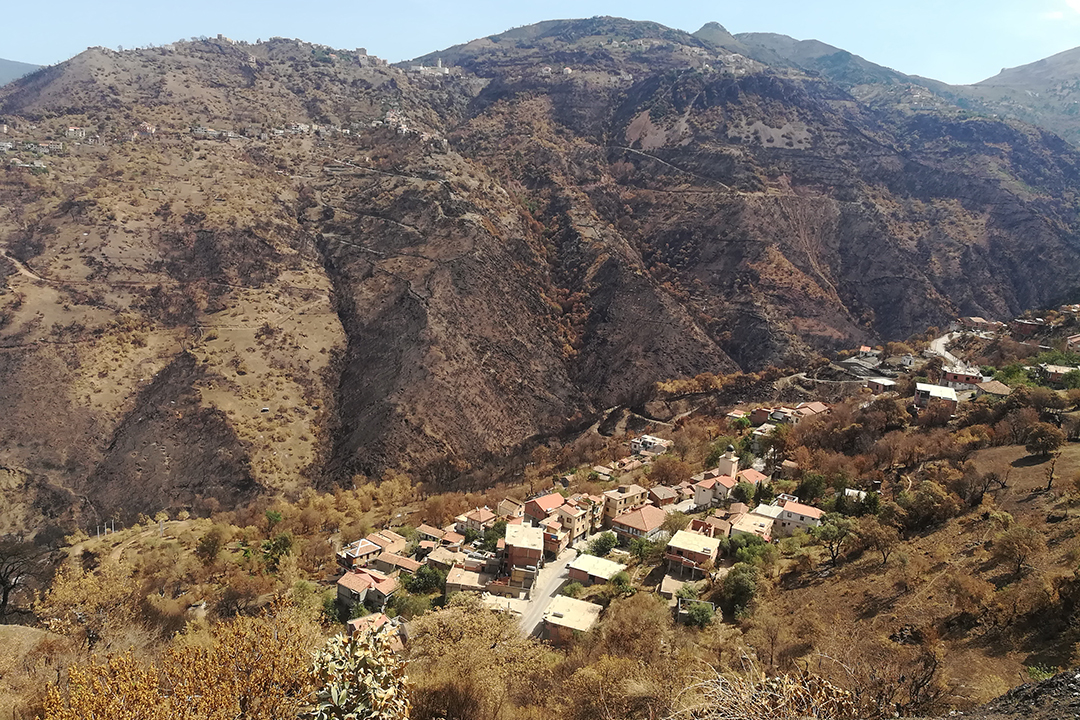 In Igreb and Agoulmime, two villages hard hit by the fires that ravaged Kabylia in August, the trauma is still alive. Reporting.

A small room with smoke-blackened walls on top of a hill overlooking a landscape of charred mountains. On the concrete benches of this agora where all the village meetings are held, the silhouette of a man stands out between shadow and light. His gaze hidden behind thick dark glasses, he exudes an impression of weariness, loneliness and deep despair. This man lost his son, Hocine Bareche, 30, in the gigantic fires which ravaged part of Kabylia last August.

“Until now, I still do not manage to realize that my son is dead, testifies this father still in a state of astonishment. I no longer sleep, I no longer eat and I expect, every moment, to see him appear in front of me. Hocine's mother, equally devastated by the death of her son, is inconsolable. She awaits the return of her boy as if he had never disappeared.

Last night, says her husband, she started shouting “It's Hocine! It's Hocine! He came back ! As he saw a figure emerge from the darkness from the window of the family house. Hocine Bareche died charred in the deluge of fire which set the village of Igreb ablaze on August 10, on the heights of Kabylia.

Hocine was discovered with his hand still gripping the shovel with which he, along with other villagers, tried to fight against the walls of flames that were mounting an assault on his village. That Tuesday, the charred bodies of four of his companions were removed from the smoldering rubble.

Time seems to have stood still

A month after the fires that devastated Igreb, as well as several villages near Tizi-Ouzou and Bejaia, time seems to have stood still in the middle of a landscape of decimated forests, charred trees, destroyed buildings, walls blackened. No detailed toll or exact count of casualties, civilian or military, has been communicated, but some speak of more than 200 dead.

Many of our young people can no longer sleep without medication

"Impossible to erase from our memory the scenes of horror which we lived", explains Moussa, a big fellow who escaped miraculously from the flames, but whose nephew perished.

A month later, the traumas are still alive. “Many of our young people can no longer find sleep without medication or alcohol,” observes Moussa. We all need to be followed and taken care of by psychologists. "

In the small cemetery overlooking Igreb, a dozen young people are busy building a stele in tribute to the sacrifice of Hocine, Abdennour, Hamidouche, Boudjemaa and Hakim, who lost their lives while trying to save the lives of the villagers. Today, these five firefighters are buried side by side in a square where we come to lay a few wreaths of flowers.

For Nacer Bareche, 56, dignified and sober in mourning and sorrow, life came to a standstill on August 10, when his son Boudjemaa, 27, was carried away by flames, after he had just won. his baccalaureate as a free candidate. Nacer's pain was rekindled after reading his late son's diary, which he discovered after his disappearance. In this notebook, Boudjemaa recorded large and small events of his life, his joys, his sorrows, his dreams and his projects.

“When I read what he wrote, I am overcome with emotions that grab my heart and guts,” says the father, who describes his son as a strong-willed, sensitive and caring young man. Sometimes that gives me the courage to go on living without him. Sometimes I am totally devastated. "

The grieving father says that when his wife recently fell ill, Boudjemaa looked after the family, prepared meals and did all the household chores. Despite this tragedy, Nacer is keen to participate in the erection of the commemorative stele on which the names of the five victims will be engraved.

This mausoleum will echo another stele erected at the entrance to the village where the names of the 44 guerrillas who died arms in hand during the liberation war appear. As if the destiny of this small village was to see each generation offer its share of martyrs.

A tremendous outpouring of solidarity

In the municipality of Larbaâ Nath Irathen, the village of Agoulmime has become a place of pilgrimage for hundreds of citizens. A marquee is erected in the village square and benches welcome visitors and passing donors. Here, as everywhere in Kabylia where fires destroyed houses, forests and livestock, the population benefited from a tremendous outpouring of solidarity and mutual aid. Tons of medicines and medical equipment, as well as food and even cash donations have poured in from all over Algeria and abroad, particularly from France, where a strong Kabyle community lives.

Even today, donations continue to arrive, while the authorities have announced substantial aid for the families of the victims and the disaster victims.

The State thus decided, as a first measure, to grant compensation of 1 million dinars (approximately 6 euros) to families who have lost a loved one.

A member of the village committee of Agoulmime expresses the gratitude of the population towards those who came to their aid. “To all who visit us, we have asked not to bring any more food or clothes,” he explains. We have more than enough of them. We don't want this to be wasted unnecessarily. "

In Agoulmime, on a small piece of land wedged between two fountains, the small cemetery newly built using an excavator has twenty freshly dug graves. Each has a name inscribed on a wooden plaque and a bouquet of artificial flowers. The latest is that of Tayeb Abdiche, who succumbed to his injuries on September 5 in a hospital in Algiers. Tayeb is buried next to his wife, his two boys, his daughter and his brother, all of whom are carried away by the fires.

In this particularly disaster-stricken village, there are also a staggering number of burn victims still hospitalized in various hospitals across the country.

The volunteer rescuers who fell by our side are ours ”

Of the 32 seriously burned people, 4 are volunteer rescuers who came with their vehicles to help evacuate the victims. "They fell by our side and are therefore one of us," said Madjid Yaghmoracen.

On Friday, September 3, hundreds of people responded to the call to come and cleanse the stigmas of these days of furnace, including charred trees and vegetation. A month later, the village is gradually reborn from its ashes, although it takes years to rebuild everything and rebuild itself.

"The emergency is our wounded"

Recently, the first person in charge of the wilaya (department) came to inquire about the situation of his citizens during an inspection visit.

As for the mayor, he rather stood out by his absence. He did not deign to come until 23 days after the tragedy. When he arrived in the central square of the village, no one answered his greeting.

“For the moment, we don't have the head to take care of the repair of our houses, explains another member of the village committee. The emergency is above all our wounded. The latter, hospitalized in remote establishments, require the permanent presence of a member of the village or of the family. "The ideal would be to find an apartment to rent nearby so that we can prepare meals for the patients and those who look after them", insists Madjid.

We received psychologists in the village, but they left as sick as us.

The impulse of national solidarity did not only translate into material and financial aid. Psychologists from several regions of Algeria went there to offer their services.

In addition to the trauma of the fires, there is the mourning, sorrow and grief of the relatives of the victims. "We received psychologists in the village, but they left as sick as us", explains a young resident for whom life goes on despite the deaths and destruction.

It is an understatement to say that this formidable citizen mobilization, which has never faltered since day one, has put a little balm in the hearts of the villagers. After the rains of last week, green and fragile shoots appeared at the foot of some charred trees. Like so many promises of a return to life, for flora and fauna as well as for men.

This article appeared first on https://www.jeuneafrique.com/1230428/societe/retour-en-kabylie-un-mois-apres-les-incendies-de-lete/

Kaïs Saïed evokes a reform of the Constitution - Jeune Afrique

The putschists announce meetings to form a government - Jeune Afrique

"Rwandan justice had nothing to hide" - Jeune Afrique