"Laurent Gbagbo will return, there is no problem" (Ouattara) - afrique-sur7

By TELES RELAY On October 26 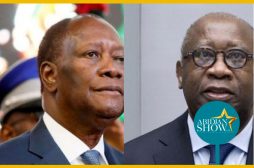 The return of Laurent Gbagbo is increasingly mentioned through official conversations. Alassane Ouattara also returned to the question during his interview with the newspaper Le Monde.

Alassane Ouattara: "I ask Gbagbo to be a wise man, like me I hope to become one"

Transferred to the International Criminal Court (ICC) on November 29, 2011, Laurent Gbagbo was acquitted by Pre-Trial Chamber I on January 15, 2019. The former Ivorian President will finally be released under conditions, fifteen days later, by the Appeals Chamber and will be taken to Brussels, to await a possible appeal from the prosecutor Fatou Bensouda.

While the proceedings are ongoing in The Hague, the conditions of restrictions imposed on former residents of Scheveningen prison have been lifted. Also, the former Ivorian head of state sent his lawyers to the Registry of the ICC to recover his passport ...READ MORE

This Article "Laurent Gbagbo will return, there is no problem" (Ouattara) - afrique-sur7 first appeared on Abidjanshow.com.

This article appeared first on https://www.abidjanshow.com/laurent-gbagbo-va-renter-il-ny-a-aucun-probleme-ouattara/

"Mr. President of the Republic, speak to us!"

Célestine Ketcha Courtès in the field to assess the progress of the work ...