In Cameroon, fear and anger after the massacre of eight students in the English-speaking South-West - Jeune Afrique

By TELES RELAY On October 25 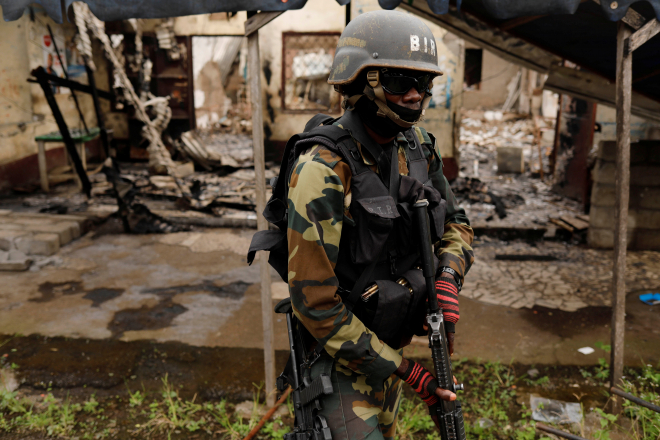 Sentences have increased since the announcement, on October 24, of the assassination of eight students in a private school in Kumba, in the English-speaking region of the South-West.

The inhabitants of Kumba are in shock since the assassination, in the grounds of the Mother Francisca college, of eight students who fell under the bullets of still unidentified individuals who broke into this private establishment on Saturday.

According to testimonies collected by Young Africa, the attackers - nine individuals dressed in civilian clothes and without hoods - burst on a motorbike shortly before the end of classes scheduled for noon. The surroundings of the school were then crowded with students. In the English-speaking regions of Cameroon, Saturday is an ordinary school day, due to “Dead Town Mondays” operations which cut the week off from a school day.

After firing in the air, some of the attackers entered the form one class - which is the sixth in the English-speaking education system - armed and opened fire on the young students. The United Nations Office for the Coordination of Humanitarian Affairs (OCHA) mentions children "cut with a machete". The report also shows about fifteen wounded.

According to the Cameroonian authorities, this attack is unequivocally "the work of separatist militias". If this thesis is also shared by many inhabitants of Kumba, the ease with which the attack was carried out revolts them. “We were assured that our children would be protected at school. How could this happen? Asks John Enow, whose 11-year-old neighbor's young son is one of eight victims. No cause can justify the murder of innocent children. "

In a press release published on the night of October 24, the government spokesperson, René Emmanuel Sadi, affirms that the college had opened at the beginning of this school year "without the knowledge of the competent administrative authorities", hence the lack of protective measures.

An argument rejected by several sources in Kumba. "This establishment has been in operation for at least three years," said one of them on condition of anonymity.

The killing caused a lot of emotion. Cameroonian Prime Minister Joseph Dion Ngute held an extraordinary ministerial council. At its end, a delegation headed by the Minister of Territorial Administration Paul Atanga Nji and including the ministers of secondary education and education was dispatched to the scene. On the ground, the prefect of the department indicated that measures had been taken "to catch up with the perpetrators of this heinous crime" and that they "will answer for their acts before the Cameroonian courts".

Calls for resumption of talks

Through its embassy in Cameroon, the United States condemned this attack "in the strongest terms" and called for an end to the violence. The president of the Commission of the African Union, Moussa Faki Mahamat, said he was "horrified" by this news, as did the French ambassador to Cameroon, Christophe Guilhou, who asked that their authors be "brought to justice and condemned ”. For its part, the European Union denounces "a violation of international law on civilian populations".

For its part, the Cameroonian opposition called for the resumption of talks with all the actors in the conflict with a view to a ceasefire. The leader of the Movement for the Renaissance of Cameroon, Maurice Kamto, estimated that only "a political solution" could bring peace.

More critical, the deputy Jean Michel Nintcheu of Social democratic front (SDF) questions the assurances given by Yaoundé about the security of schools. "This failure has in fact transformed the students into a human shield, the responsibility of the regime is formally established," he denounced. Only the resolution of national disputes and the return to federalism can lead in the short or medium term to lasting peace. "

A senator expresses his concerns about the unfolding of the ...