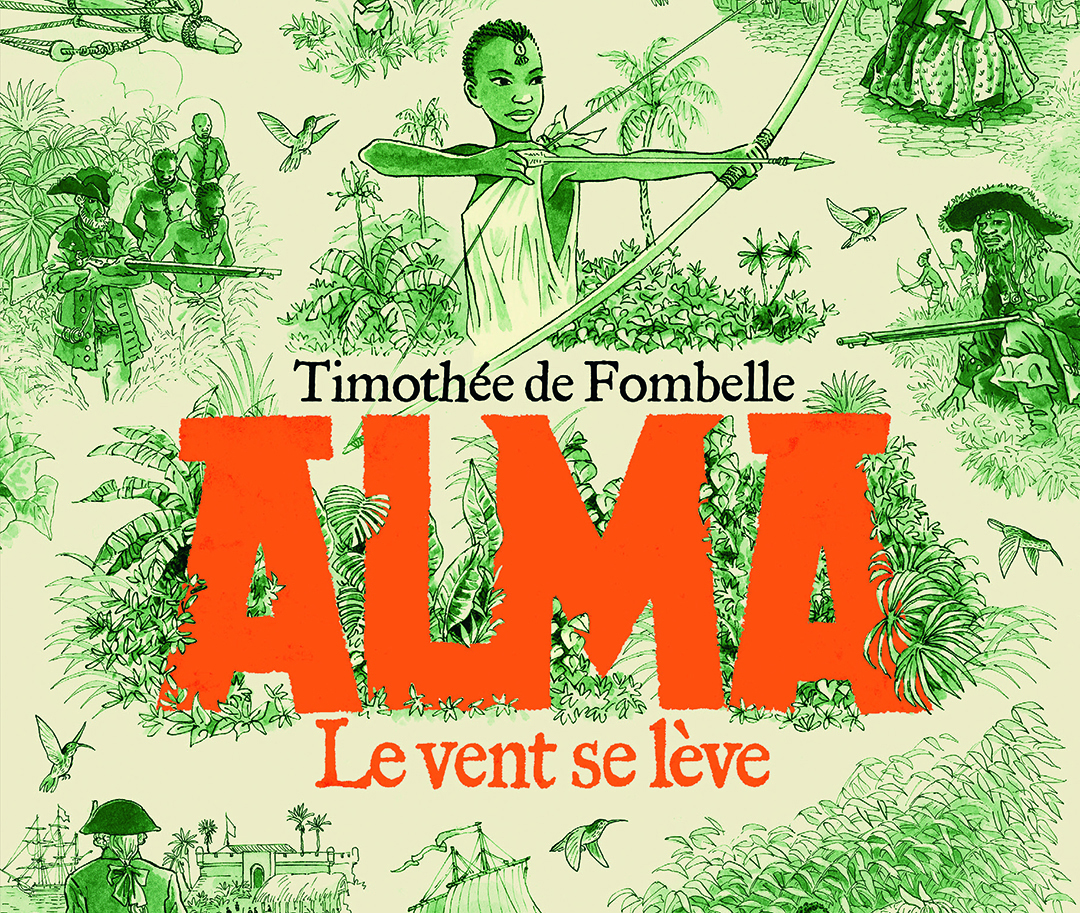 In "Alma, le vent se lève", the French novelist offers the first part of a trilogy devoted to the history of slavery.

Author known for Tobie Lolness, an ecological and poetic parable on the contemporary world, Timothée de Fombelle follows in his new opus the adventures of a young Oko, part of the family of which was kidnapped by slave traders, Joseph, a French adventurer on board of a slave ship, and a multitude of other characters. The first part of a trilogy with powerful verve, supported by a rich documentation and carried by a writing as sensitive as removed.

Young Africa : Alma, the great fresco on slavery that you have just started, was born from a stay in Africa when you were a teenager.

Timothée de Fombelle: When I was about 5 years old, I lived for a year in Morocco, in Agadir. My father was an architect and town planner, he was in charge of the city's master plan. This period allowed the little Frenchman born in Paris in the 14th that I was a sensitive discovery of elsewhere. Later, around the age of 13, I lived for two years in Ivory Coast, my father working at the Urban Planning Workshop in Abidjan. At Jean-Mermoz college, I was able to meet many people. It was a very intense moment of discovery. There was no idea with us of rebuilding a sort of little France abroad, and Abidjan was the starting point for walks to Mali and Ghana. Today, when I have to locate myself in time, I realize that all my memory is built around this moment: there is the before and after Côte d'Ivoire.

Did you change at that time?

Change is linked to uprooting, to elsewhere, which are obsessions in what I write. Finding myself in Abidjan is a shift that feels good and allows me to discover lives very different from mine, when I was in my teens. It transformed me. At this age, we are very sensitive sponges to what surrounds us, and even our parents cannot realize the intensity of what we are going through. As an adult, I wanted to leave. In Vietnam, as a young teacher, I realized that I was looking for Africa in Asia!

It is from the Ivory Coast that you discover the forts built on the coast ...

During the All Saints holidays, we left for Ghana, in our Mazda station wagon. We visited the entire string of forts that I mention in Alma: Elmina, Cape Coast, Shama. With my camera around my neck, I didn't know what I was going to find when we reached the first of those white fortresses falling into the sea. It was a terrible shock. I had no doubt heard of the tragedy of slavery, but it was something abstract. There, a guard explained to us what really happened in this place where thousands of Africans - millions across the coast - passed through before being embarked to cross the Atlantic. There remained traces of the passage of these men and women in the earthen crust of the cellars of the fort. It was overwhelming.

In Alma, several characters become aware of reality in the same way.

Yes, this transformation is inspired by my personal awareness and especially the path that I would like to take my readers. We can learn that a mass of people were deported to another continent, but they were individuals with each their history. Each being was torn away with its whole life! This is what I realized in Elmina.

Have you documented a lot?

Yes, I do as a survey while writing. My documentation is varied. There are history books which synthesize what we know about the Atlantic slave trade, like those of Marcus Rediker on the slave ship, piracy and all the proletariat of the sea. He has a fairly Marxist vision of it. Atlantic of the seventeenth century and is interested in the most disadvantaged. I also read very specific studies, including one on trafficking in La Rochelle. And, thanks to Gallica, the online library of the BnF [National Library of France], I had access to the raw archives that are the ship's books, with a majority of testimonies from slave traders, which is very disturbing. .

Slave stories are much rarer

Slave tales, like that of Olaudah Equiano, which offers a point of view from the hold and not from the upper deck, are much rarer. There are a few testimonies from judicial sources which tell the journey and the crossing of certain slaves, but they can be counted on the fingers of one hand, while those concerning life in the plantations are more numerous. I also documented myself on ancient Africa. Research in this area has deepened in recent years, notably thanks to the book by François-Xavier Fauvelle. And then there are also the works of some crazy people, like Jean Boudriot, who wrote on a boat called Dawn!

This is the one who inspired you The Sweet Amelie, in which Alma embarks ...

Yes, this boat left in 1784, two years before The Sweet Amelie. I have fifty or sixty shots of this ship and its frame that allow me to walk around it. Dawn left Rochefort, where it was built, for a classic crossing. He arrived in Senegal, then he sailed along the coast to the kingdom of Kongo. Then, it crossed the Atlantic towards Santo Domingo, then at the height of its splendor. The slave trade was intensive there to allow the production of sugar.

Alma is one of the last representatives of the Oko people. Did this people really exist?

No, it's my part of the imagination. I needed this freedom in the very real world that I describe by evoking the kingdom of Boussa, the Niger river, the Ashantis. I suffered too much while reading what existed in literature on the subject: typical paths of young captives ... in the genre "Live my life as a slave"! A memory begins to be alive when we can infuse it with imagination. This is the only way to pay homage to him. So I created the Okos, which allows me to come close to the fantastic with this idea of ​​a people who, being reduced, concentrate powers and talents. So much so that they will almost acquire superpowers.

There is an orisha with this name ...

This people is a sort of synthesis, a somewhat cubist collage of elements borrowed from different civilizations. I read the story of a deserted city very quickly, without anyone knowing why, and where we found a lot of pottery. It is in the folds of this kind of mystery that I invented this people. The word itself is a fabrication, even though there is an Oyo people ...

There is an element of magic in your novel. Is it because it is often associated with the continent?

I wanted there to be some magic - when he sits down, plants grow under Alma's brother - because that kind of sight transports me. But I wouldn't have used a Spider-Man superpower, I needed to base this magic on African traditions, songs and griots in particular. Alma's mother, who holds the ship together with her song and her story, I did not invent her. On a slave ship, a woman was left to sing at night because, when she weakened, revolt roared. It's a story that makes me think I'll never live up to what happened.

In this tome, you tell how Africans captured other Africans.

All historians talk about it. In the XNUMXth century, there were no raids, because Westerners were afraid. They preferred to outsource this very dangerous job which required them to move away from their base and fight when they preferred to negotiate. In Alma, I show how this trade, with its ships and their gaping holds which swallowed human beings, has completely disorganized and exhausted Africa. This industrialization is caused by the craving for coffee and sugar in European courtyards and suburbs. I am not mistaken about the hand that directs it. With three volumes of 400 pages, I can show the complexity of this story.

Your characters are complex too. And deeply human.

My raw material is the human and the universal in the human. Whether I support a European or an African, I do it exactly the same way. Every character has a thousand facets, and I can't manage to create a villain without showing the flaw that made him mean. I'm not trying to excuse them - I have some real garbage in my portrait gallery! -, but they did not come out of their mother's womb with the “wicked” sign on their forehead.

You still have a fairly Marxist vision of the relationship between the good guys and the bad guys ...

It is also a classic vision of the story of all eternity, opposing the wolf and the lamb. I have the good old faults of the storyteller who confronts the dark villain with the poor little thing tossed about by life. This vertical view of relationships that we find in Tobie Lolness with Jo Mitch, sort of real estate tycoon, it is the reflection of life.

As part of the trafficking, I had no difficulty building the character of a villain. This moment in history is astounding in that it denies a part of humanity. And everyone benefited from it. A baker from the depths of France could sell his biscuits even on the boats! Europe was built like this!

Where will the next two volumes take place?

The second begins in the city of Cap-Français and takes place in Santo Domingo as well as in Louisiana, on the plantation side. There is also a European part, with the very beginnings of abolition in England, around a character who really existed, Thomas Clarkson, a young Briton who begins to fight for the liberation of slaves. And Alma will meet again in Versailles during the winter preceding the French Revolution. The third volume will focus on the great revolt of Santo Domingo. Along with the unsuccessful European abolition movements, I want to deal with marronnage and those moments when slaves try to free themselves.

Controversy in a glass of water

A small controversy stirred the literary community at the exit ofAlma. The Anglo-Saxon editor of Timothée de Fombelle, Walker Books, has in fact decided not to publish it on the pretext that as a white the author would not be legitimate to tell the story of a black child confronted with slavery. This is not the first time that this kind of ideas is invited into the debate: there was a time when some survivors of concentration camps refused that their story be the subject of a book of imagination. But to push this logic to the limit would be to sign the death warrant for all literature. A certain Victor Hugo wrote in preface Contemplations: “We sometimes complain about writers who say me. Tell us about us, we shout at them. Alas! When I talk to you about myself, I am talking about you. How do you not feel it? Ah! fool, who thinks that I am not you! "

Books: the story of the blind of Bafia, a terrible mistake ...

Succession of Fatou Bensouda at the ICC: the candidates are struggling to convince - Jeune Afrique

60 years of independence for Benin: a modest celebration because of the Covid-19 - Jeune Afrique

Books: the story of the blind of Bafia, a terrible colonial error - Young…

Restitution of African heritage: meeting with activists prosecuted for ...