60 years of independence for Benin: a modest celebration because of the Covid-19 - Jeune Afrique 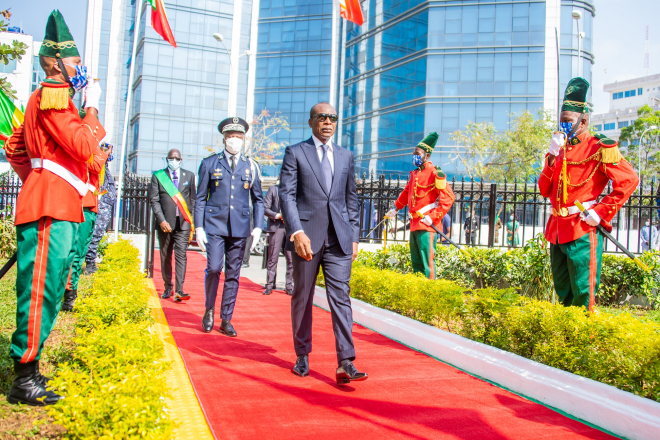 Benin celebrated the sixtieth anniversary of its independence on Saturday without the traditional festivities. In particular, the parade of security and defense forces has been canceled.

This is a first, which has not, however, generated reactions or protests in the country, which has 1770 confirmed cases and 35 deaths, according to figures as of July 24.

The Beninese government had announced that there would be no festivity and canceled the traditional parade of security and defense forces, considered the biggest attraction of this commemoration for 60 years.

About ten minutes of ceremonies

President Patrice Talon nevertheless proceeded to a wreath laying ceremony on the place of the war memorial, after having lit the "flame of hope" there.

He then took part in a modest ceremony of taking up arms and reviewing the troops in front of a small detachment of the republican police, the air force, the naval forces, and the air force. and the National Guard, a newly created component within the military.

On social media, the accounts of the country's main institutions, including the presidency and the government, launched two hashtags - #FiereDetreBeninoise et #FierDetreBeninois - which have been taken up by many Internet users.

The day before, the Head of State of Benin had sent his traditional message to the nation broadcast on television and on social networks.

“The celebration of this national holiday takes place in a very particular context, marked by the Covid-19 pandemic. It is the most serious health crisis of our time. It is coupled with an economic crisis that is just as worrying, ”said Patrice Talon.

The Beninese president also affirmed to have implemented "a courageous response policy, with significant financial means", in order to "prevent the spread of the pandemic and ensure the effective care of those affected".

On Friday, the government notably announced its intention to support farms and small and medium-sized enterprises with a financial plan of 100 billion CFA francs (More than 152 million euros).

The PJD facing the erosion of power - Jeune Afrique

“Health is an investment in human capital, not…

the story of the hearing of Nouria Benghabrit, ex-minister ...

The PJD facing the erosion of power - Jeune Afrique

“Health is an investment in human capital, not just a cost” -…

the story of the hearing of Nouria Benghabrit, former minister of Abdelaziz Bouteflika -…