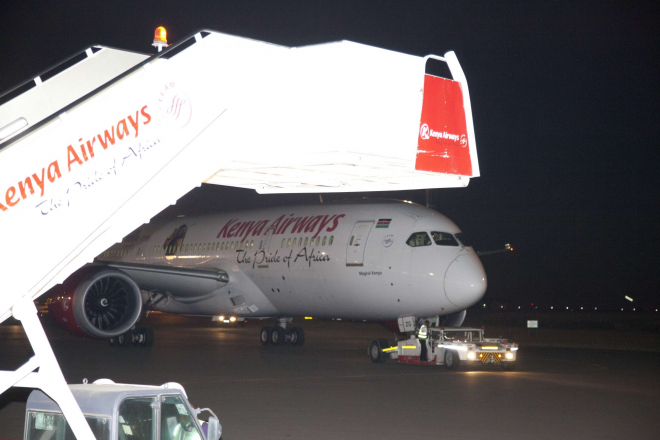 While connections between the continent and Asia have grown by 5% in 2019 - more than the world average -, African carriers fear a shortfall of more than 400 million dollars just because of the stop of the services to China.

According to Raphaël Kuuchi, Africa vice-president of the International Air Transport Association (Iata), "the first estimates indicate that 400 million dollars could be lost" by the airlines of the continent, on the basis of the data arrested "the second week of February ”and solely because of the cancellations of services to China. These data were made public during the Aviation Africa summit, held on March 4 and 5 in Addis Ababa.

The coronavirus epidemic has forced almost all African airlines - with the exception of Ethiopian Airlines - to stop serving the Middle Kingdom. Globally, Iata mentions a loss of turnover of up to 63 billion dollars, in the event of a pandemic limited mainly to Asia with a recovery for the summer season in other regions, to 113 billion dollars. dollars, for a scenario sparing no destination.

An Africa-Asia axis that was progressing, including in freight

For African airlines, this crisis comes at a time when the air interconnection of African and Asian markets has recorded strong growth in recent years. According to a study by the association published at the end of February, “the Africa-Asia market experienced the strongest growth in 2019 (+ 5%), in a context of solid trade relations between the two regions. However, the pace was much lower than in 2018 (9,4%) ”. This increase in the number of revenue passenger-kilometers, a flagship indicator of the industry, is higher than the global growth (+ 4,2%) recorded last year and that of the connections between Europe and the continent, while on Africa-Middle East routes, traffic is rather declining, with a decline of 1,7% in 2019.

The Iata report also notes that African companies posted "the highest annual fill rate in the history of our time series (71,7%)". The good health of the Africa-Asia axis in 2019 was also reflected in the transport of goods. “Freight tonne-kilometers (FTK) of African airlines experienced strong growth of 7,4% in 2019, compared to -0,3% in 2018. This improvement is due to strong growth in capacity and links between investment with Asia. Indeed, Africa-Asia connections recorded double-digit growth in FTKs last year (12,4%), ”Iata experts remind us.

However, it should be noted that even before the impact of the coronavirus, all the indicators were not green in the African sky. Despite the increase in paying passenger-kilometers in Africa last year, revenue in dollars per passenger is declining on all routes on the continent, in a context of heightened competition. The most marked decline concerns intra-African connections (- 8,7%). It is - 7% for those between Europe and Africa, - 5% for the Middle East and - 3,1% for North America. Unsurprisingly, this affected operator margins, which were estimated to be down -4% last year, from -3,4% in 2018.

The industry, however, maintains its appetite in Africa for the acquisition of new aircraft: with 40 deliveries in 2019, including 17 single-aisle aircraft. In 2020, 28 aircraft of this type should be delivered to African operators, against 5 large aircraft.

Coronavirus: Air France facing the precautionary measures of the countries ...

Is this a clue that one of the biggest events ...

"We must create an African civil law" - Alhousseini Diabaté,…

Ebola in the DRC: "If all goes well, we can declare the end of the epidemic on April 12" - Jeune Afrique

Is this a clue that one of Apple's biggest events could be ...

"We must create an African civil law" - Alhousseini Diabaté, guest of…